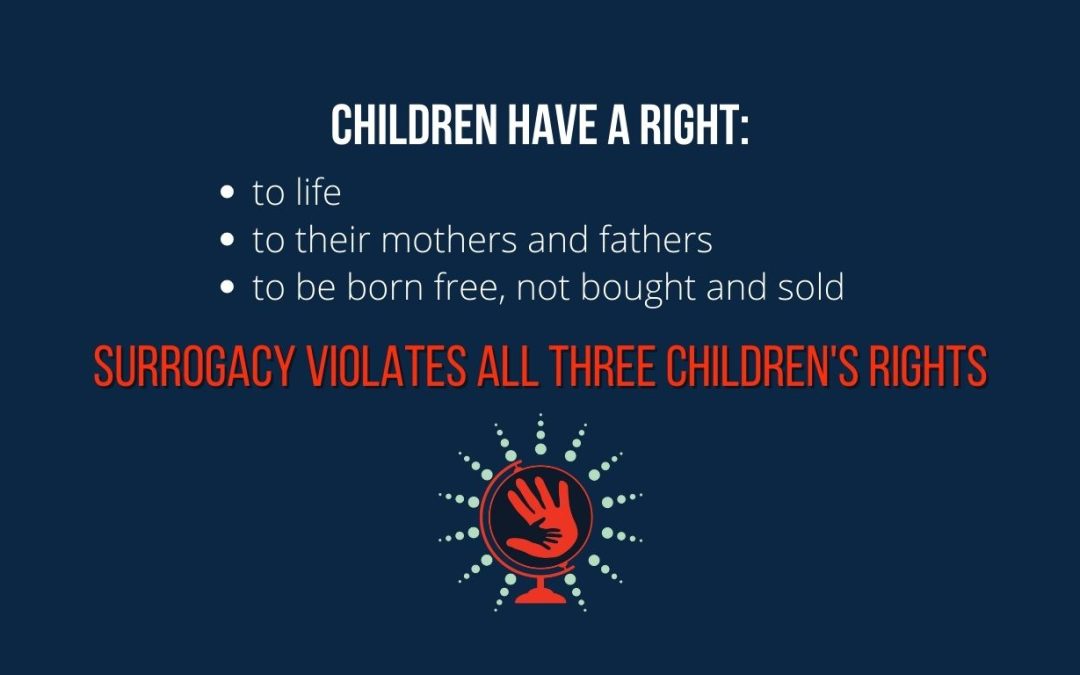 Only 7% of lab-created children (IVF is essential to surrogacy) will be born alive. Most will perish in forgotten freezers, won’t survive “thawing,” fail to implant, be discarded for being non viable/the wrong sex, be “selectively reduced,” or be donated to research.

When you see surrogate-born children whose parents are lobbying in the capitol, remember, those babies are among the few who didn’t die in the process. Most children created via surrogacy contracts will lose their right to life.

Violating Children’s Right to their Mothers and Fathers

Children Suffer When They Lose Their Birth Mothers

Studies show that maternal separation, a feature of surrogacy, is a major physiological stressor for the infant and even brief maternal deprivation can permanently alter the structure of the infant brain. Many adoptees argue that the “primal wound” of maternal separation manifested as depression, abandonment/loss issues, and emotional problems throughout their lives. It hindered their attachment, bonding, psychological health, self-esteem, and future relationships. One surrogate-born woman notes:

Children Suffer When They Lose Their Biological Parents

Children have a right to be known, loved, and raised by their biological parents. Surrogacy routinely severs a child’s relationship with their genetic mother and/or father through widespread use of sperm and egg “donation.”

Children raised by their married biological mothers and fathers are most likely to be safe and loved. While heroic step-parents do exist, overall, the presence of unrelated adults drastically increases a child’s risk of abuse and neglect. Statistically, biological parents are the most protective of and invested in children. Even if they aren’t neglected or abused, children tend to feel less connected to unrelated adults. That’s often true for children created via reproductive technologies:

Even if they aren’t neglected or abused, children tend to feel less connected to unrelated adults. That’s often true for children created via reproductive technologies:

I am egg donor conceived…My current Mother…well growing up never accepted me…or even really cared to grow a bond with me…It makes sense why now. There is a massive disconnection due to IVF. – Son of egg donor

After a wrenching divorce, I never again saw that ‘dad’ of mine. My mother remarried, and I was given a new ‘dad.’ But neither the first nor the second man ever made me feel safe in my own home. – Alana Newman, child of sperm donor

Genetic parents are the only two people who provide something children crave- biological identity. A survey of adults conceived via sperm donation confirmed that biology matters. Most of the respondents,
-agreed “my donor is half of who I am.”
-often wondered what personality traits, skills, and physical similarities they shared with their donor.
-worried they did not have a complete/accurate medical history

Who am I? I’m thankful to know I’m at least related to my dad, but when I look in the mirror, I wonder where my face comes from. – Child of egg donor

Many surrogate children will be denied the daily presence of a mother. Motherless children are deprived of the developmental benefits of gender complementarity and experience diminished outcomes as a result. They are also starved of the maternal love they crave:

I didn’t know there was such a thing as a mother until I watched ‘The Land Before Time.’ My 5-year-old brain could not understand why I didn’t have the mom that I suddenly desperately wanted. I felt the loss. I felt the hole. As I grew, I tried to fill that hole with aunts, my dads’ lesbian friends and teachers. I craved a mother’s love even though I was well-loved by my two gay dads.

In 2012, Theresa Erickson was found guilty of baby selling. She implanted Ukrainian women with fertilized eggs and during their second trimester, Erickson would solicit intended parents, claiming the original parents had backed out. She charged between $100-150K per baby. Her crime was not that babies went home with unrelated adults – a common occurrence for #BigFertility. It was that she signed the surrogacy contract after conception (child-trafficking), not before (“helping to create a family”). Of course, a post-conception contract can’t alleviate a child’s genealogical bewilderment, feelings of commodification, and mother-loss trauma. Other than timing, there’s no legal difference between child-trafficking and commercial surrogacy.

The largest study of children created via sperm donation, which carries a much smaller price tag than surrogate pregnancies, found that nearly half agreed with the statement, “It bothers me that money was exchanged in order to conceive me.”

I don’t care why my parents did this. It looks to me like I was bought and sold. You can dress it up with as many pretty words as you want… But the fact is that someone has contracted you to make a child, give up your parental rights and hand over your flesh and blood child. When you exchange something for money it is called a commodity. Babies are not commodities. Babies are human beings. –Brian C (Child of Surrogacy)

My conception was bought and sold, my father, the sperm prostitute. He is a seller not a donor. The cryobanks are a billion dollar corporation not a benevolent non- profit organization to help the infertile. Money is all that matters. Money is dirty and I was born out of it…. My life had a price and I am the one who bears the consequences. – Child of sperm donor

…being ‘wanted’ can sometimes feel like a curse, like I was created to make you happy, my rights be damned. I’d be lying if I said I never felt commodified. – Bethany, Child of sperm donor

A detailed explanation of surrogacy’s harms, additional child testimonies, and more studies can be found HERE.