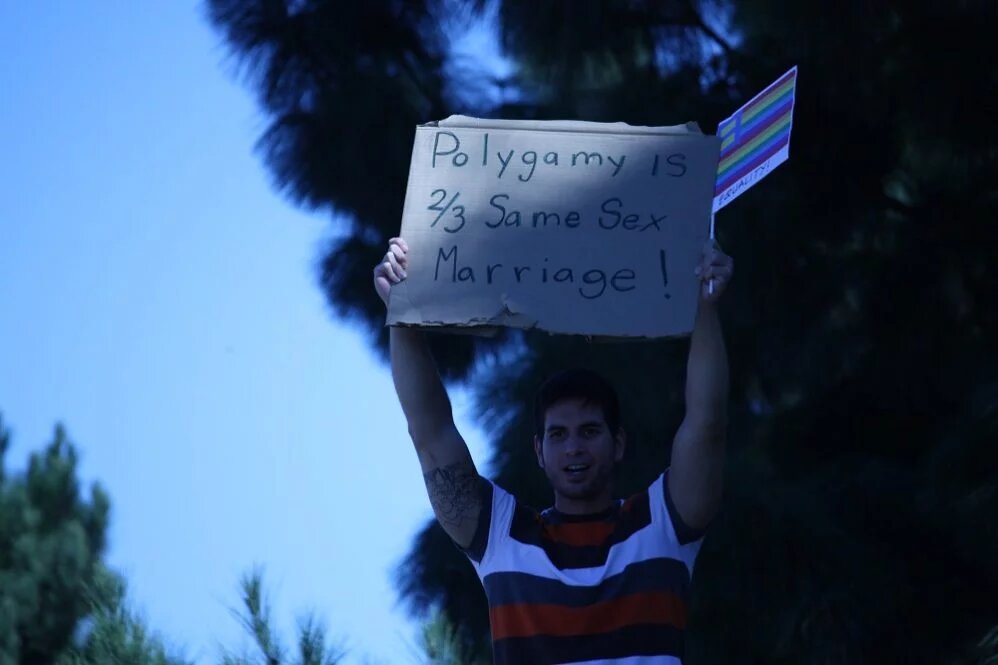 “I just came out openly to friends.” “Love is love” and we deserve “equal protection under the law.” We are “not harming anybody.” “The world would be a better place if everybody was more open.” “I am proud of who I am” but I am “rejected by society.” “It’s unhealthy to force people into a choice that might not fit them,” especially when you have “love at the core of your relationship.”

Perhaps you assume those are quotes from LGBT activists during the push to legalize same-sex marriage? Oh, come on, where’ve you been? Gay marriage is so 2015.

Your mistaken assumption is entirely understandable, however. It is, after all, the same script advocates of gay marriage used, but surprise! These quotes are from proponents bent on normalizing poly relationships. The “love is love” strategy was so successful for the gay marriage lobby, why should polygamists reinvent the wheel?

The latest slip down the slope those uptight Christians warned us about was just served up, compliments of a Utah Senate committee that passed a bill decriminalizing polygamy. This bill’s sponsor reasoned people in polygamous unions are “tired of being treated like second-class citizens, they feel like Utah has legalized prejudice against them.”

Utah’s new legislation is only one of several recent attempts to normalize plural unions. Even HGTV is doing their part to mainstream polygamy by showcasing its first throuple on “House Hunters.”

The pro-gay and pro-poly scripts are one and the same because both view marriage as adult-centric. From this perspective, the only consideration for what constitutes a marriage is with whom you share a love connection. That’s because when marriage is simply a vehicle for adult fulfillment, as per the Obergefell ruling, marriage morphs into whatever assemblage makes adults happy.

The biological sex of the spouses, the duration of the relationship, or the number of parties on the marriage license matters not, only the feelings of the participating adults do. So the logical conclusion is if marriage is exclusively concerned with adult feelings, there’s no problem with same-sex marriage. If our gay and lesbian friends have the same capacity to love and commit as heterosexuals, who are we to say polygamists are any different?

Same-sex marriage is listed right above polygamy on the menu for Ways to Damage Children’s Rights. Robust studies, as opposed to those using recruited, self-reporting, or convenience samples, reveal kids with same-sex parents do not fare as well as peers living with their married mother and father. The stories told by kids with same-sex parents confirm the data. Kids struggle when their mother or father is missing, regardless of how well-loved they are by two adults of the same (or opposite) sex.

Three ‘Parents’ Aren’t Better than One, Either

So what about kids with an additional parent, like those in polygamous unions? The oft-ignored decades of data indicates non-biological parents tend to be less connected to, invested in, and protective of children in their care. While of course nearly everyone reading this can name a heroic stepparent, statistically, outcomes for kids with stepdads are on par with those raised by single mothers.

In addition, unrelated cohabiting adults pose a risk to children for abuse and neglect. This is especially true with mom’s live-in boyfriend, a standard player in poly homes like the one featured in “I’m Dating 4 Guys – And Now I’m Pregnant.” Sociologist Brad Wilcox explains why the most dangerous place for a child is in the home of mom’s cohabiting lover:

Even stepmothers, statistically, don’t nurture another woman’s offspring as well as they do their own children. Three Princeton University economists found children who live with a stepmother were provided less health care, had less access to education, and fewer dollars were spent on their food when compared to children raised by their biological mothers.

It would be a feat of ideological delusion to believe adding unrelated adults in polygamous homes would bear positive outcomes for children. It’s no surprise a 2012 review of polygamy’s social drawbacks, “The Puzzle of Monogamous Marriage” found that poly marriages have “elevated risks of intra-household abuse, neglect and homicide because such households have lower average relatedness” mostly due to “unrelated dyads.”

In laymen’s terms, more child abuse and neglect occurs in polygamous homes because unrelated adults are present. That is, much like step and cohabiting families, the non-biological parents in poly relationships are less connected to the kids, which elevates risk.

The authors summarize: “Living in the same household with genetically unrelated adults is the single biggest risk factor for abuse, neglect and homicide of children. Stepmothers are 2.4 times more likely to kill their stepchildren than birth mothers, and children living with an unrelated parent are between 15 and 77 times more likely to die ‘accidentally.’”

Social stigma is not to blame. Poly unions have been breeding fractious families since the time of Abraham, Isaac, and Jacob.

Kids of Poly Parents Speak Out

Beyond the increased risk of abuse and neglect, kid’s generally don’t “love it” when their dad is making moves on a woman other than their mother. James, raised in a polyamorous home, shares,

I hated seeing my dad kiss another woman in front of me. It would anger me to see my own dad with someone else who was not my mom. But at such a young age I didn’t know how to react or voice my discomfort. I never told anyone how I felt because I didn’t feel it was my place to do so. It took me well over fifteen years to reflect on the household structure in which I grew up, and understand how it affected me. In my late teenage years I began dating two girls at the same time, of course without their knowledge. In the end I hurt both girls, something I now deeply regret. It wasn’t until my early twenties that I began questioning my intentions, desires, and actions when it came to dating. I wish I only had my mother and father with me in my childhood.

Marriage has little to do with how the adults feel, who they love, or how they “identify.” We recognize marriage because it has a child-specific benefit.

The trouble with same-sex headed households is the absence of an adult to whom the child has a natural right, thus a decline in child well-being. Polygamist families will always include an extra adult whom science says will diminish a child’s well-being. Both same-sex marriage and polygamy infringe on the rights of children.

The data has no agenda and no amount of politically correct platitudes will transform either of these “Modern Family” arrangements into one that honors the rights of children. While a free society should permit adults to form consensual relationships, a just society promotes the only adult relationship that protects children’s rights. If you happened to miss it, that relationship is one-man-one-woman marriage.