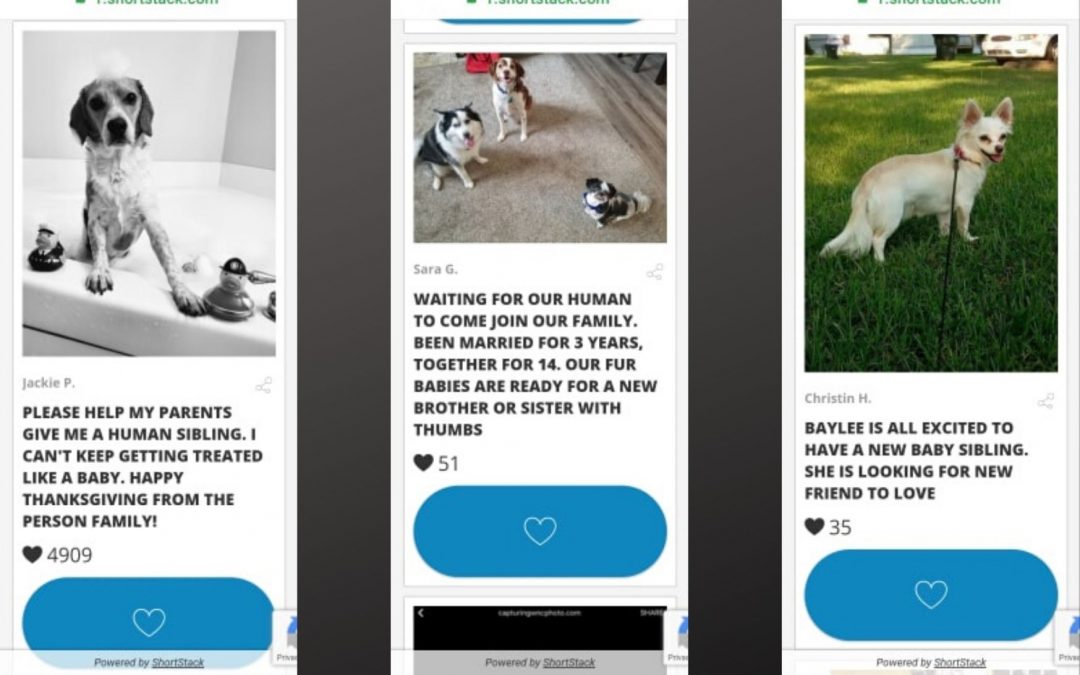 This is not the first time, and surely won’t be the last, that a fertility clinic is conducting a promotional give-away to market their company and services. The California Cryobank does the same every year on their “spermiversary.”

However, many donor conceived people felt Fairfax had further crossed a line. The irreverent timing of Fairfax’s “contest” fell on Thanksgiving, which also happened to be “National Family Medical History Day.” The children conceived to the winners of this “contest” would of course be denied the accurate family medical history, a fixture of  “donor anonymity.”

In a shameless effort to generate “content marketing,” Fairfax Cryobank requested that hopeful recipient parents “share a photo of your favorite Thanksgiving memory now through November 30 and you’ll be entered to win!” They nudged, “the winner will be selected based on users’ votes, so get started sharing & voting now!”  Interestingly, multiple entries featured dogs appealing for a “human sibling,” as if children are items to be accrued like pets. (See image up top.)

Because the contest was open to photo submissions from anyone, several donor-conceived adults submitted photos and comments of their own, often mimicking the adult submissions.

The first donor-offspring post was pulled down within the hour. The second removed just as quickly. Not to be dissuaded, the party with the most at stake in this “contest” (the children) continued to post throughout the day knowing full well that their posts would be taken down by moderators as fast as they appeared.

Cassandra Adams, a donor-conceived woman whose post was removed, had this to say:

Sometimes the commodification of children born of donor conception feels like a hidden concern, only visible to us: something personal felt in the spirit, a pit in the stomach, the lingering sense of a dollar sign placed on our identities. Other times, when we see it glaring in front of our faces, we beg those involved in all aspects of ART, from industry to consumers, to examine it with us. Fairfax Cryobank’s recent contest to win sperm is just such an example. My existence is not a fun contest, a flippant joke. It is not a game. I am not a prize, nor a gift. It is dehumanizing to bring that aspect into an already complicated situation. A “contest” like this exposes the mindset and inner biases of the fertility industry’s narrative: popularity and commercialization, subtlety leading everyone involved into making light of the gravity of creating a human being.

When questioned about their repsonse Fairfax replied: “Regarding the Thankful for You Photo Contest, we were trying to bring joy to families during the holiday season. It is not our intention to offend anyone with the coincidental overlap with National Family Health History Day…In order to ensure the legitimacy of the contest submissions, only genuine entries were approved, spam and false entries were filtered.”

In the age of commercial DNA testing, the fact that Fairfax still offers donors “anonymity” illustrates how out of touch they truly are. All they are guaranteeing is that donor-conceived people will not have access to their biological identity until they get their 23andMe results. At which point those donor-conceived people’s only hope is to bow and scrape, hope and pray that the man to whom Fairfax promised anonymity will chose to share with his children what is rightly theirs- himself: whether that be just medical information or ongoing contact with their biological father.

Whether Fairfax realizes the irony of their contest date, and whether they understand how offensive their censorship of donor-conceived voices was is unclear.  What is clear, is that if they chose to hold another “contest” next year, they’ll do so with the full knowledge that the victims of their services- the children- are sickened by their timing and methods.