Yes, Surrogacy is Wrong Even When Straight Couples Do It. 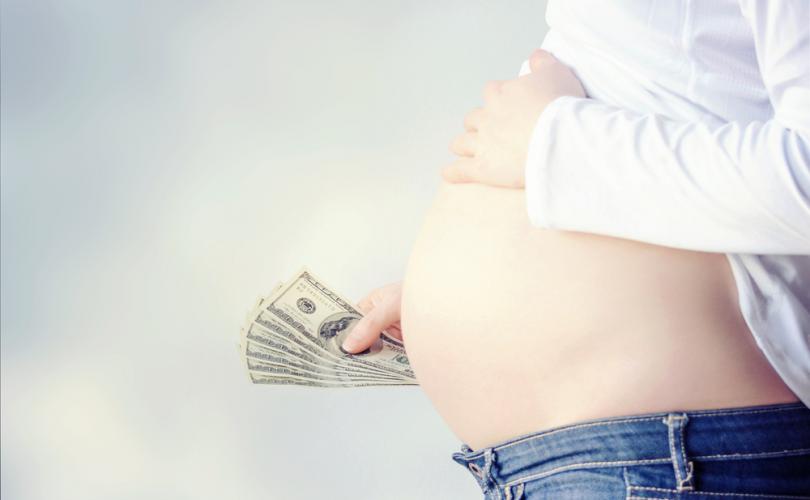 Their Instagram announcement doesn’t say why Coco was born of surrogacy. Perhaps Field had difficulties with her other pregnancies or perhaps she just needed to squeeze into that glittering gown. Whatever the perceived challenges or benefits that led the celebrity couple to outsource this pregnancy, it’s baby Coco who is paying the price.

While it may fulfill the desires of adults, surrogacy is always harmful to children. Even in the “best case” scenario like this one, where the genetic mother and father are also the “intended parents,” surrogacy forces the child to sacrifice a critical bond with her birth mother. Williams and Field may be her biological parents. But on her birthday the surrogate is the only parent Coco knows.

It’s the unnamed surrogate’s body and voice that Coco longs for; it’s her smell that Coco recognizes. It’s her milk which provides the baby-specific nutrients that not only fill Coco’s tiny stomach but satisfy her little heart as well. We don’t immediately place newborns on the chests of random women so they can forge a bond. We place them on their mother’s chest because they have an existing bond. Someday it will matter to Coco that she is genetically related to Williams and Field. But today, they are just two strangers in a foreign world.

Last summer, the entire country was seething over the separation of children from their parents at the border – because tearing a child from her parents is cruel, and we all know it. A petition to end the border policy, signed by 12,600 mental health professionals, explained, “to pretend that separated children do not grow up with the shrapnel of this traumatic experience embedded in their minds is to disregard everything we know about child development, the brain, and trauma…” Yet, I assume that many who decried separations at the border would celebrate the arrival of Chicago Kardashian-West and Robert Ray Black-Daley via surrogacy despite the fact that parental separation was central to the birth plan all along.

And lest you believe that it’s traumatic for a two-year-old to lose her mother but an infant doesn’t know any different, you’ve got another think coming.

In my quest to establish the children’s rights organization Them Before Us, there has been one demographic which has been difficult to win over. It’s not the kids with same-sex parents who need a place to process their fatherlessness or motherlessness without being called a bigot. It’s not the children of divorce who, even in their 40’s, are still trying to keep both parents happy on Christmas day. It’s not the donor-conceived children whose stories reveal that being “loved and wanted” doesn’t compensate for their missing parent.

There are some adoptees who won’t endorse our mission because we support adoption as a means of repairing a broken situation. Many who were adopted at birth feel they suffered a “primal wound” when they were separated from their birth mother, even if they were subsequently placed in a loving home. They’re not wrong. Studies show that maternal separation is a major physiological stressor for the infantand even brief maternal deprivation can permanently alter the structure of the infant brain.

Even though adopted children tend to be raised in homes with above-average incomes and more highly-educated parents, they still have more academic and behavioral challenges than their peers raised by their married, biological parents. Many adoptees argue that the trauma they suffered at birth has manifested itself as depression, abandonment/loss issues, and emotional problems throughout their lives. Given their ongoing struggles, some adoptees can’t imagine a scenario where separation from one’s birth mother and subsequent adoption is ever justified.

The experience of adoptees gives us a glimpse into how surrogacy, a booming global industry, will impact countless children. And while it will be decades before most children of surrogacy will be able to share their perspective, one surrogate-born woman doesn’t mince words in her condemnation of the practice:

While both surrogacy and adoption involve significant loss for children, there is one critical area where the two family structures differ: adopted children are raised by adults who are seeking to mend the wound inflicted by tragedy or hardship. Surrogate-born and donor-conceived children are being raised by the very adults who inflicted the wound. One family structure supports children’s rights, the other violates them. One requires adults to support children in their loss, the other forces loss on the child to support the desire of adults. When it comes to the best interest of the child, there’s a big difference between seeking to mend parental loss and paying six figures to create it.

At this point, the only thing that would assuage Coco’s suffering would be to remain with her surrogate forever. Of course later in life she would wonder, as many donor-conceived children do, about the identity of her genetic mother. Like all children, Coco craves attachment with the woman who carried her, as well as the biological identity passed down from Field. But for Coco to be raised by one mother, she must lose the other.  It’s almost as if those two roles – genetic mother and “gestational carrier” – were meant to be the same woman.

Whether the “intended parents” choose surrogacy because neither possesses a womb, or because they don’t want another celebrity judge to replace them on the X Factor, surrogacy is, by its very nature, an injustice to the child. Birth is intended to be a continuation of the mother/child bond, not the moment at which the child suffers an intentional, primal wound. It’s the day when a baby should see the mother she already loves for the first time… not the last.