Regardless of how often we hear, “it doesn’t matter who raises a child as long as they are safe and loved,” the data reveals that being raised by both biological parents is one of the strongest predictors of whether or not a child will actually be safe and loved.

But don’t take my word for it.  Listen to the experts:

First, research clearly demonstrates that family structure matters for children, and the family structure that helps children the most is a family headed by two biological parents in a low-conflict marriage. Children in single-parent families, children born to unmarried mothers, and children in stepfamilies or cohabiting relationships face higher risks of poor outcomes than do children in intact families headed by two biological parents. – Kristin Anderson Moore, Susan M. Jekielek and Carol Emig, “Marriage from a Child’s Perspective: How Does Family Structure Affect Children, and What Can We Do about It?”, Child Trends Research Brief, June 2002.

If we were asked to design a system for making sure that children’s basic needs were met, we would probably come up with something quite similar to the two-parent family ideal. Such a design, in theory, would not only ensure that children had access to the time and money of two adults, it would provide a system of checks and balances that promote quality parenting. The fact that both adults have a biological connection to the child would increase the likelihood that the parents would identify with the child and be willing to sacrifice for that child and it would reduce the likelihood that either parent would abuse the child. – Sara McLanahan, Growing up with a Single Parent: What Hurts, What Helps.

Most scholars now agree that children raised by two biological parents in a stable marriage do better than children in other family forms across a wide range of outcomes.” –Brookings Institute

Unrelated Adults Are Less Protective, Invested, and Connected to Children

Decades of research on family structure (or simply googling “mother’s boyfriend”) reveals that it takes more than being in a romantic relationship with a child’s parent, to be a good parent to a child. It’s widely acknowledged that adults respond differently to children who are not biologically related to them.  They tend to be less invested, connected, and protective towards unrelated children.  This phenomenon is known as the “Cinderella Effect.” Children are more likely to be neglected and abused when living with an unrelated cohabiting adult, especially an unrelated male.

Brad Wilcox summarizes the data from the Fourth National Incidence Study of Child Abuse and Neglect:

In a recent study, “The Puzzle of Monogamous Marriage,” the authors write:

Much empirical work in monogamous societies indicates that higher degrees of relatedness among household members are associated with lower rates of abuse, neglect and homicide. Living in the same household with genetically unrelated adults is the single biggest risk factor for abuse, neglect and homicide of children. Stepmothers are 2.4 times more likely to kill their stepchildren than birthmothers, and children living with an unrelated parent are between 15 and 77 times more likely to die ‘accidentally’.

Another recent study revealed that children are healthier and more likely to grow up with a good education and to get a good job if their biological father is with them. But when a step father moved into a family home there are no benefits for the children.

The well-understood risks posed to children who are under the care of a biological stranger is the very reason why adoptive parents rightly undergo scrutiny prior to, and supervision after, having a child placed with them.

The graph below reflects data from the National Incidence Study (Number 4) in 2010, a periodic surveillance of child physical, sexual and emotional abuse. It is clear that the rates of abuse are far lower with “married biological parents” (the only category where both parents are the child’s biological parents) than any other category. 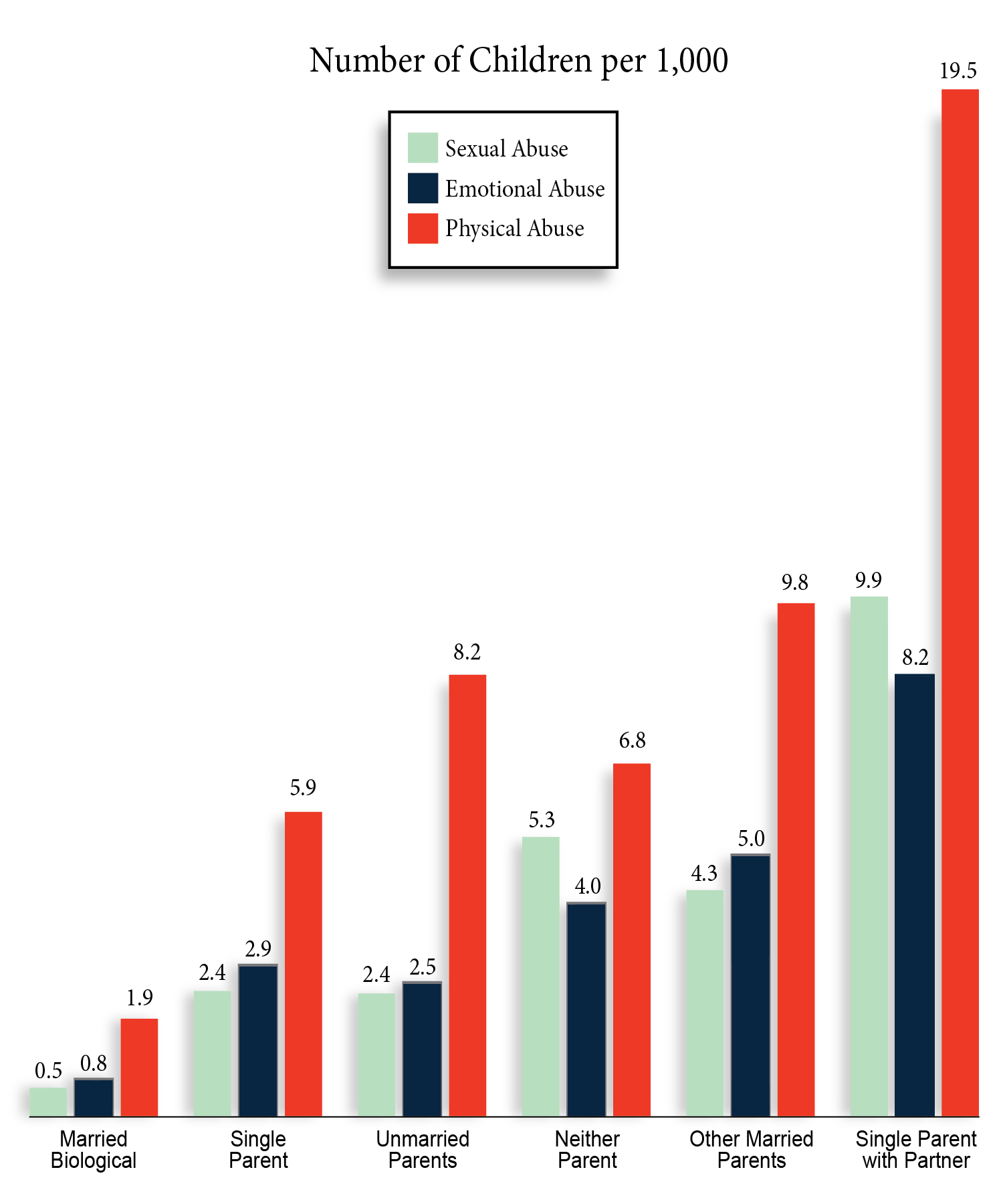 Protecting and advocating for children involves understanding how biological connection in the parent-child relationship impacts child well-being.  The statistical reality is that there are significant benefits and protections when a child is raised by both biological parents.  No other family structure approximates the benefits to children who are raised- not just by two loving adults, nor by just a married man and woman, nor even by their own unmarried parents- but by their married biological parents.